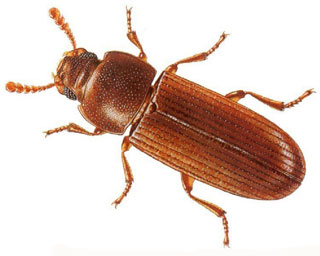 While confused (and red) flour beetles cannot feed on whole, undamaged grain, they are often found in large numbers in infested grains, feeding on broken grain, grain dust, and other household food items such as flour, rice, dried fruit, nuts, and beans. Both types of beetles are often found not only in infested grains, but in crevices in pantries and cabinet, as well. Damage to food is caused somewhat by the beetles’ feeding, but also by their dead bodies, fecal pellets, and foul-smelling secretions. In addition to creating a very bad odor, the beetles’ presence encourages the growth of mold.

Apply at a rate of 20 seconds per 10m2. Also apply around cartons and containers, where these insects tend to congregate. Contact as many insects as possible. Repeat treatment weekly or as insects appear. Infested stored products should be fumigated or treated by other effective methods using an approved product intended for this purpose.

Apply into cracks and crevices of pantries, cabinets, food processing and handling equipment, and other places where insects harbor.