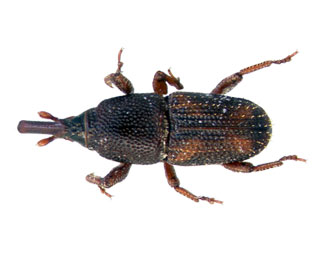 Similar to other pantry pests, granary and rice weevils will infest and feed on whole grains and rice as well as nuts, beans, cereals, seeds, corn, and other such foods.

When they infest grain that is stored in bins and remains undisturbed, they can completely destroy the food.

In the home, weevils can be brought in on packaged foods or they can come in from outside. Once inside, a population can grow and expand to food items stored nearby if they are not controlled.

Apply at a rate of 20 seconds per 10m2. Also apply around cartons and containers, where these insects tend to congregate. Contact as many insects as possible. Repeat treatment weekly or as insects appear. Infested stored products should be fumigated or treated by other effective methods using an approved product intended for this purpose.

Apply into cracks and crevices of pantries, cabinets, food processing and handling equipment, and other places where insects harbor.