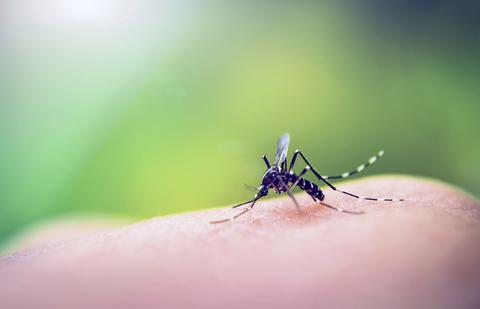 Flying and biting insects are a nuisance to every man, woman and child (and their pets) who long to enjoy the outdoors.

But what has been viewed traditionally as an annoyance has now become a serious and potentially life-threatening problem with the arrival of mosquito-borne illnesses such as West Nile Virus.

In In 2007, 3630 human West Nile Virus cases were reported. In fact, as of December 2007, human and avian/animal cases of West Nile Virus have been reported in 47 states:

The main route of human infection with West Nile Virus is through the bite of an infected mosquito. Mosquitos become infected when they feed on infected birds. The virus eventually gets into the mosquito’s salivary glands. During later blood meals (when mosquitos bite), the virus may be injected into humans and animals, where it can multiply and cause illness. (Source: CDC.gov)

Mosquitos can lay their eggs in even insignificantly measurable amounts of water, including fish ponds, bird baths, old tires, tin cans, lingering puddles of rain, guttering, catch basins, tree cavities or basically any place that can hold water. The eggs may hatch in less than 3 days, and the entire mosquito life cycle can be completed in 5-10 days. This means that the threat of mosquito-borne illnesses are a continuous threat that must be dealt with to keep your family safe.

Mosquito and insect control products come in many shapes, sizes and forms. There are lotions, gels, pump sprays, candles, yard bombs, propane devices – literally thousands of different ways of attacking a backyard bug problem. But none of them really protect you from mosquitos and the diseases they carry like MosquitoNix’s mosquito mist system and monthly treatment program can.